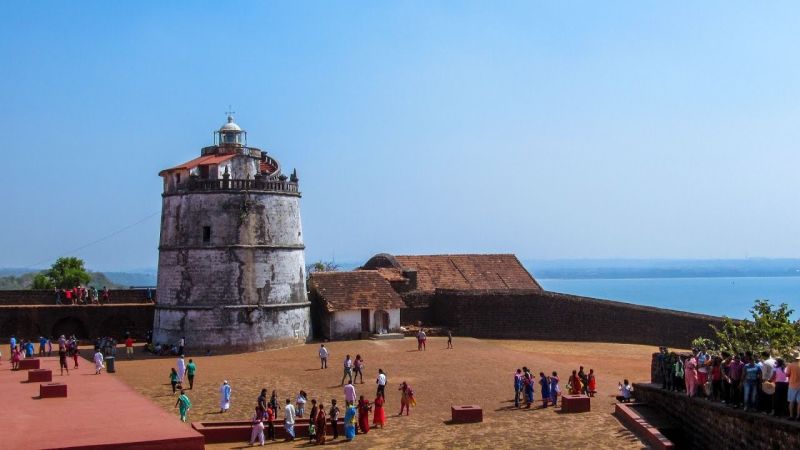 The coastal state of Goa is a picturesque landmine of rich history that dates back centuries. The various dynasties that ruled Goa brought various things along with them and carved and shaped Goa. This is why Goa is the diversified beauty that we witness today. One of the many things that these dynasties have brought to Goa, especially the Portuguese, were various different forts. We often see these forts in various different Bollywood movies. But while they’re incredibly scenic they’re also a hidden gem of history. Dwell into the history of two of Goa’s most famous forts, Aguada Fort and Chapora Fort, before visiting these structural beauties. 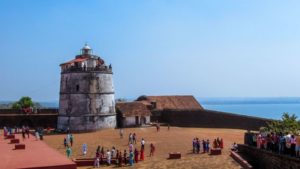 One of the oldest and most magnificent Portuguese forts in Goa is the resilient Aguada Fort. It is strategically positioned on the estuary of the Mandovi river. The Aguada fort was built by the Portuguese to control the entry into the Goa via the Mandovi river. This was done to protect the then Portuguese capital of Goa, Old Goa from the Marathas and Dutch enemies.

Construction of the Fort

The building process of the Aguada fort started in 1609. However this humongous fort was only completed in 1612. This was one of the strongest bastions and best defense bases built by the Portuguese in Goa. With thick battlements that bordered Fort Aguada and a dry moat, it was impossible to make your way into the fort. But even with those defenses, the inside of the fort was armed with 200 cannons making it a suicide mission to attack the fort. Of course, that didn’t stop invaders from trying.  But none were lucky enough to capture the fort in the 450 years that the Portuguese ruled Goa.

Naming of the Fort

The fort was named Aguada due to a freshwater spring ran within the fort.  This spring was used to provided water to the ships and sailors that docked there. The Portuguese word ‘Agua’ translates to water. Since the fort housed a number of wells as well, it was named Aguada which symbolized a place where water accumulated.

The Famous Lighthouse of the Fort

One of the most eye catching parts of the Aguada fort is the old four-storey lighthouse.  The structure stands tall overlooking the never-ending sea. What makes the lighthouse so special is that it is one of Asia’s oldest four-storey lighthouses. This lighthouse wasn’t built in 1609 but later on, in 1864. It was originally built to hold an oil lamp. However, when the lighthouse was renovated in 1976 this was removed and replaced with a modern light. The lighthouse in the Aguada fort also used to house an old gigantic bell that was rescued from the ruins of St. Augustus in Old Goa.  Now this bell can be seen at the Our Lady of Immaculate Conception church that is also famously known as the Panjim Church.

The fort is not in the same condition it was when the Portuguese first built it.  IT was later re purposed and used a prison. The prison was Goa’s largest prison until it was shut down in 2015.

A trip to Aguada Fort is definitely worth the visit if you’re in Goa. Take in the cool sea breeze and the crashing of the waves along with the rich past that sounds you in the walls of the fort. It’s definitely a sight to see and not to be missed 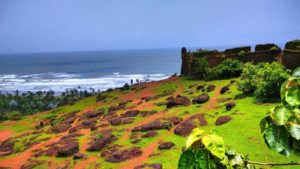 The rustic old red-laterite bastion, that is the iconic Chapora Fort lies in Chapora North Goa. It has been the backdrop of a number of emotional moments in various Hindi movies. But before that, it was a border watch-post built by the Portuguese.

Construction of the Fort

In 1617, the Portuguese were ruling Goa. At that time they built this majestic fort atop an old Muslim structure that was built by the previous regime. This fort, is situated in Bardez and overlooks the Chapora river. It was built due to the constant threat that the Portuguese faced from different enemies such as the Bahamani Kings in the North, the Marathas from the East and the local Chieftans from the area.

History of the Fort

The Chapora fort that we can see and visit today and that is famous for its Dil Chahta Hai point. However its is not the same as the one built in 1617. Though the Portuguese ruled Goa for over four centuries, they were usurped in different locations during their rule. In 1684 Sambhaji, the then Maratha ruler and son of Shivaji took over the fort and the Portuguese troops surrendered to him. Though the locals were now free of the Portuguese they were unhappy with the Marathas as well.  As a result they had a number of conflicts with them. So, the Marathas withdrew from the Chapora fort.

Tunnels in the Chapora Fort

This was not the end of conflict for the Chapora fort. It was attacked several times by Hindu raiders during the 17th century. Finally in 1892, the Portuguese abandoned the fort an and all that remains today are its ruins that have faced the test of times.

Though the once fortited structure is now in ruins it is definitely worth the visit if you’re not in the area. The breathtaking view of the sun setting down and disappearing into the Arabic Sea is definitely a highlight. Aside from the great view that the Chapora fort has to offer, one can also see old tombstones. Besides this one can also see the heads of the old underground tunnels that were used by the Portuguese.

Did you know that the Portuguese used to build Churches on the outskirts of various forts to prevent enemies from firing at close range? Goa has so much of history bottled up inside these amazing old monuments. If you’re in Goa then the forts of Aguada and Chapora are a must on your to-do list.

If you’re in Goa and you’re looking for a holiday home, we’ve got the perfect place for you. Goa Casitas offers you a wide range of luxury villas and private apartments with the best of amenities. These are located in prime locations such as Baga Calangute, Arpora and Vagator.We have got something for everyone. So, click here to choose the perfect holiday home for you!