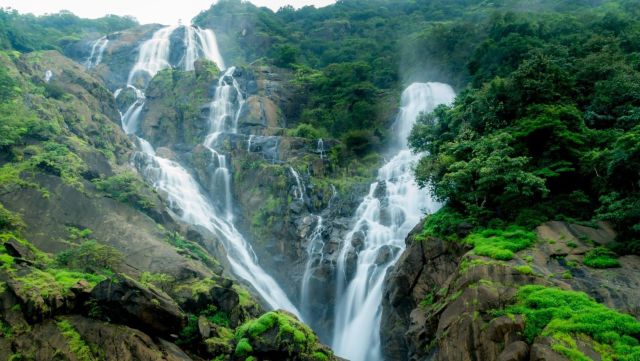 Take a Trip to Dudhsagar Waterfalls

A getaway from the fast-paced world of work, studies and technology is something that we all need every now and then. Take a break from your everyday routine and take a trip to the evergreen, nature-filled state of Goa to rejuvenate and clear your mind. Goa is filled with luscious green hills and gushing rivers on all sides. This emerald state is any trekker’s or nature lover’s paradise. If you’re on a holiday in Goa, then a trip to Dudhsagar Waterfall is a must on your checklist.

The Dudhsagar waterfall snakes its way down a rocky green mountain of the Western Ghats and is Goa’s most scenic waterfall. This gorgeous waterfall gushes down from a height of 1017 feet, making it the fifth tallest waterfall in India. It is about 30 feet in width and definitely not a sight to miss. Though the water flows with force down the mountain all year round, the Dudhsagar waterfall is a sight to behold during the monsoons. The water roars down the mountains like an unstoppable force and the smell of petrichor is enjoyable to the senses. The name Dudhsagar literally translates to ‘sea of milk’, a reference to the way the milky white water looks as it cascades down the mountain. 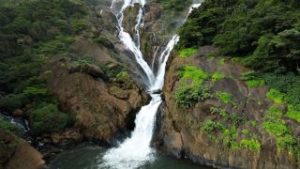 The Myth Behind the Name Dudhsagar Waterfall

Legend has it that once a princess who pure of heart, mind and body used to bathe at the lake.  After the bath she would drink milk in a jug made of gold and studded with diamonds with her handmaids on the shore. One day a prince who was making his way through the woods heard their laughter and chatter. He stopped to see what was going on.

The prince was stunned to see the beautiful princess, who was the daughter of the King of Ghats. In order to protect the princess’s modesty, her handmaids poured the milk down in a cascade in front of her. While the cascade of milk acted as a curtain the princess was able to change her clothes behind it.  This cascade of milk is believed to be the reason why the water appears milky white as it gushes and that’s where the name Dudhsagar is meant to have come from.

Where is Dudhsagar Waterfall Located?

This four-tiered waterfall cascades down in all its glory near the Goa-Karnataka border, in the Sanguem taluka. By road it is approx 60 kms from Panjim. The waterfall is located in the Bhagwan Mahavir Wildlife Sanctuary and is a part of the Goa Forest Department. While this destination is on most tour lists, the journey  to get here isn’t suitable for all. One can go here either by car, train and then further by trekking or hiring a jeep to take you further into the park. Beyond that, you still have to walk to the waterfall. The journey may be tiring but the breathtaking view of the Dudhsagar is worth it 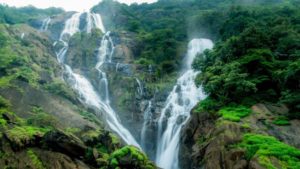 Which is the best time to visit Dudhsagar?

Undoubtedly the monsoons are the best time of the year to visit the falls. The monsoon in Goa start off from the first week of June and is at its peak in July.  During this season the force of the fall and the volume of water is the highest. This is because of the heavy rains the region experiences during this time of the year.

How Do You Reach Dudhsagar Waterfall?

There are four different ways that you can reach this magnificent waterfall. Each way is suited for different people, so before going there, consider how much you love trekking.

The trek from Castle Rock railway station in Karnataka is a perfect place to start if you’re not in Goa. Though it is the longest route to Dudhsagar waterfall, it is preferred by tourists. The journey from Castle Rock is around 14 km and would take about 5-6 hours. During this trek, one gets to see some of the most scenic parts of Goa as you cross through hills and forests on the way.

The trek from Kulem railway station to Dudhsagar is 11 km and would take around three hours. While this route is shorter than the one from Castle Rock, it is not as popular. The great thing about this route is that you can see the Dudhsagar viewpoint that was made famous in the movie Chennai Express. The railway track that is just one meter away from the waterfall, can be seen from here.

If you’re not interested in trekking all 11 kms to reach Dudhsagar, then you can hire a jeep from the Kulem railway station. Since the path is uneven and bumpy, it is only suitable for a four-wheel-drive vehicle and not your regular cars. In any case only Forest department approved jeeps are allowed here. This is due to the fact that it is within the National park area. You can hire one from the Dudhsagar Taxi Stand for about Rs 2000. They will take you up to one km away from the falls. The jeep service is available from 8.30 AM to 4 PM. From there you will have to trek to see the waterfall. This option is great if you’re going to Dudhsagar waterfall with family or kids.

The trek from the village of Kuveshi is the most adventurous and difficult route to the Dudhsagar waterfall. This quaint little village is 10 kms away from Castle Rock railway station and you can take a car to reach there. This route takes you through the dense picturesque forest, making the trek both calming and full of adrenalin. The trek crosses over a part of the Mandovi river and isn’t open during the monsoons as the water gets too rough to cross.

A trip to Dudhsagar waterfalls will be a journey to remember. It’s not something that you want to miss out on while in Goa. This beautiful state may have many places to trek and many waterfalls to see but you’ll never find one as majestic as Dudhsagar.

If you’re planning a holiday to Goa and want some peace, quiet and a private place to stay in, then check out Goa Casitas range of private apartments and luxury villas across Calangute, Baga and Vagator. Click here to get started on planning the trip of a lifetime!