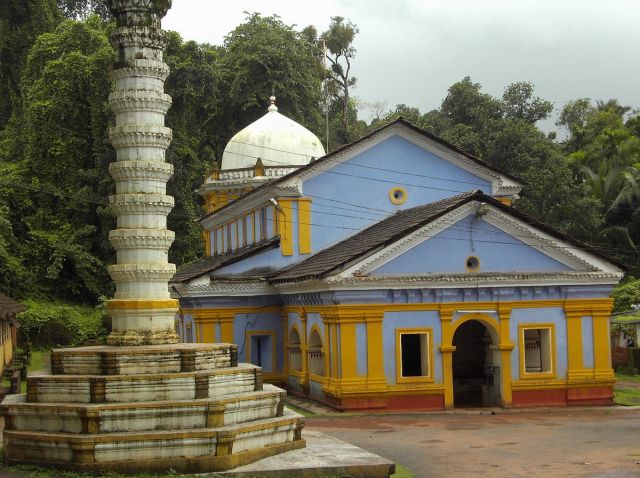 Goa is a state that’s dotted with a rich culture and history. The region has been ruled by many dynasties. It has been ruled by the Kadambas, Marathas, Mughals and then finally as a colony by the Portuguese. Thus Goa is a hub for some of the best religious monuments which include temples, mosques and temples as well.

There are several interesting stories about the temples in the Ponda area of Goa . This is so as many idols from other temples were carried to Ponda. The shifting of these idols was done to take them away from the Portuguese missionaries who did not approve of other religions. These beautiful temples are a must visit for every one and not just for the religious devotee. This is due to the fact that these temples of Goa provide a deep insight into the history, culture and architecture of  the land. With the vast number of temples in the North and South of Goa, it is difficult task to pick which ones to visit. But here is a list of some of the most iconic temples for you to visit while in Goa. 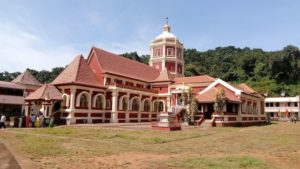 The Shri Shantadurga Temple is located in the serene village of Kavalem, Ponda.  This temple has a unique architectural style as it incorporates both Indian and Portuguese architecture. This temple was originally a small mud-shrine.  However it was destroyed by the Portuguese in the 18th century. There after it was rebuilt into the stone temple it is now.

This temple houses a statue of Shantadurga and is therefore devoted to her. She is the goddess who mediates between Shiva the destroyer and Vishnu the preserver. Shantadurga is thus shown holding two serpents, one in each hand. Each of the two serpents represent Vishnu and Shiva respectively. This temple also provides guesthouse facility for visitors and devotees who wish to stay and pray here. 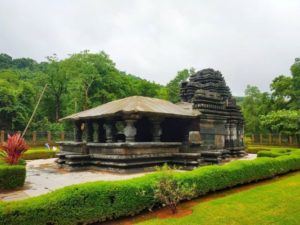 The Mahadev Temple of Tambdi Surla was built in the 12th century.  It is one of the oldest surviving temples in Goa. It is dedicated to Lord Shiva.  This beautiful temple is carved from black basalt stone in Jain style. The entrance to this temple has several  pillars. It is believed that this historic temple is the only structure left that has the southern-Indian originating Kadamba-Yadava architecture in basalt stone.

The temple is located in the midst of lush greenery.  It faces the direction of the rising sun i.e. East. Due to this the rising sun’s rays fall directly on the panels of the temple.  These panels are adorned with the figures of Lord Shiva, Lord Vishnu and Lord Brahma as well as their consorts. At the center of the mandap of this temple, a statue of  Lord Shiva’s vehicle, a headless Nandi is also situated.  It is surrounded by four matching columns. Carved on the base of one column is the symbol of the Kadamba kingdom, an elephant that is trampling a horse. Local legend says that a huge King Cobra still lives inside the inner sanctum where the linga, a symbol of Lord Shiva, is mounted. 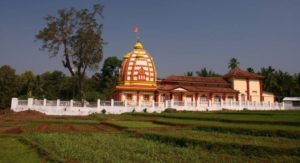 The Brahma Temple is situated in the beautiful village of Nagargao. It holds the skillfully chiseled statue of Lord Brahma. As per Hindu mythology Lord Brahma is the creator of the universe. This statue dates back to the Kadamba period in the 12th-century. This idol of Lord Brahma stands in the center of the premises and is portrayed in trimurti form. Though this temple isn’t very famous, it’s a must-visit among the temples in Goa as it is believed that Lord Brahma blesses everyone who comes to worship him here. 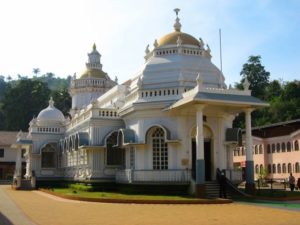 The stunning Mangueshi Temple wasn’t always located in its present home. This temple was originally located in the village of Kushasthali in Cortalim. The Portuguese during their rule, had started conversions in several areas across Goa. The Manguesh Linga was there fore smuggled away from its original home in Cortalim to a more secure location in Ponda.

The main deity of this Mangueshi Temple is Bhagavan Manguesh. Lord Manguesh is an incarnation of Lord Shiva. He isn’t referred to as Manguesh anywhere else in India, except for Goa. Legend states that Lord Shiva had gone into a self-imposed exile that brought him to Goa. This exile was the outcome of loosing a game of dice with his wife Parvati. Bhagavan Manguesh is worshipped here as Shiva linga. The Sabha Griha of this temple is a spacious hall that houses chandeliers from the nineteenth century. The central part of this Sabha Griha leads to the Garbha Griha of the temple, where the image of Manguesh is consecrated.

The legend of this mighty Saptakoteshwar temple dates back to ancient times. It is said that seven holy sages sat at the junction of the five holy rivers and prayed to Lord Shiva here. They continued praying for 70 Million years.  After this Lord Shiva came to them to grant them their wishes. Lord Shiva also agreed to stay in the area of his incarnation. Sapt means seven and Koteshwar means Lord of Crores. Thus this incarnation of Shiva here is called Saptakoteshwar . Devotees from all over the country come to this temple to attend the annual temple festival on Gokulashtami. It is said that on this day Lord Shiva appeared to the devotees to grant their wishes. 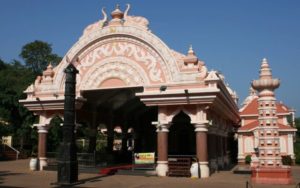 Along with these idols of Mahalaxmi in this temple are the idols of Shri Ravalnath, Shri Baleshwar, Shri Narayan Purush. Besides this the temple also houses two idols of Safto and Fato. Both of these are the devotees who had rescued the idol from Colva. If you’re in Goa during the festival of Ramnavmi, then be sure to visit this temple. While on the first day of Ramanavmi, the second idol of the temple is taken out for a procession on the second day, both idols are paraded on a chariot. 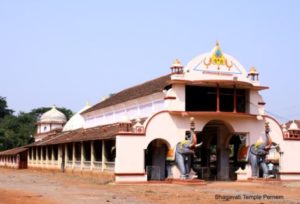 This ancient Shri Bhagwati Temple is dedicated to the Goddess Bhagwati. She is an incarnation of the Goddess Parvati who is Lord Shiva’s consort. This 500-year-old temple is one of the few that survived Portuguese rule. At the entrance of this temple, one is greeted by two carved black elephants that stand on either side. This temple compound consists of five different temples. Besides the main temple the remaining four are dedicated to Shri Sateri, Shri Dev Ravalnath, Shri Dev Bhivangi Panchakshari and Lord Brahma.

Visiting these temples is a great way to learn about Goa’s unique history , culture and architecture as well. If you’re planning a holiday in Goa, book a home away from home with Goa Casitas. Pick from our variety of luxury villas and apartments at diverse locations. Among them are Vagator, Calangute and Baga as well. We can arrange for you to visit all the temples mentioned above. Click here for more details about our services.