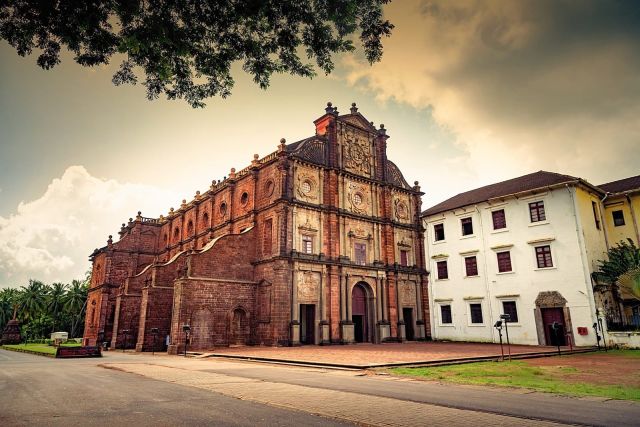 Churches To Visit While In Goa – The Top 7

Goa is known to all as the land of the sun, sea and beaches but it’s so much more than that. It isn’t just a paradise for beach lovers, but it’s also a paradise for people who love architecture, history and culture. The Portuguese sailed their way to Goa in the early 16th century.  The mark the Portuguese left on this tiny state is still very prominent. They reigned the region for  450 years a part of what is now Goa.  The Portuguese built numerous magnificent churches all over the Goan coastline, that rival any new ones built today. If you’re in Goa, then these grand and elegant churches are a must visit at least once.

Here are the Top Seven Churches To Visit While In Goa

The Basilica of Bom Jesus 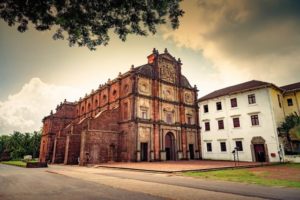 One of Goa’s most famous churches is the Basilica of Bom Jesus. It is situated in Old Goa (Velha Goa). It  was built in the early 16th century and is known for its baroque architecture. People of all faiths, from all around the world visit this Basilica.  The interiors of the church have a Mosaico-Corinthian style.  The tomb and sacred remains of the revered St. Francis Xavier are housed in this structural wonder. St. Francis Xavier is the Patron Saint of Goa. Every third of December, on the death anniversary of the saint, people visit this stunning church.  Here they pay their respects and witness the miracle of his naturally preserved body. This church in Goa is a UNESCO heritage site. It is the only church which is not plastered with any cement from the outside. 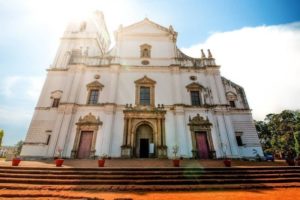 Se Cathedral was built in 1562 under the reign of King Dom Sebastião. It was built in honour of Afonso de Albuquerque who took possession of Goa in 1501 after defeating the Muslim army. This battles was on the day of the feast of Saint Catherine of Alexandria. This is why this gorgeous cathedral is dedicated to Saint Catherine of Alexandria. It is also due to this that the church is also known as Saint Catherine’s’ Cathedral. This is one of the biggest churches in Old Goa. It has a Portuguese-Gothic style architecture and a Tuscan exterior . There were originally two bell towers here. The southern one collapsed in 1776 and was never rebuilt, making this a unique feature of the church.

Church of St. Francis of Assisi 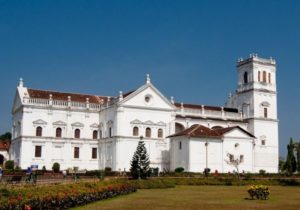 Church of St Francis of Assisi was Originally a small chapel in Old Goa. The Church of St. Francis of Assisi was established by eight Franciscan friars in 1517.  In 1529 this Portuguese Manueline architecture style structure was remodeled into a church. The interiors of the church have multiple paintings that adorn its walls and depict the life of St. Francis of Assisi. It houses a convent. Besides this it is  the only church in Goa which houses a museum.  This museum showcases Goa’s culture and past through various paintings, sculptures and artifacts. 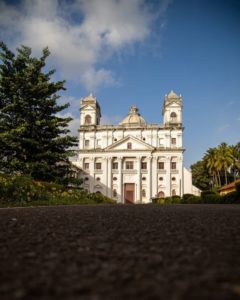 This stunning church is modeled on the original design of Saint Peter’s Basilica in the Vatican City.  It is also commonly known as the Church of Our Lady of Divine Providence.  This structural wonder was built by Italian friars of the Order of Theatines in 1665. This church is named after the founder of the order, Saint Cajetan. The altar of this church is dedicated to Our Lady of Divine Providence. Inside the church compound is an ancient arch with pillars that are adorned with Hindu carvings.  These carvings are believed to be part of the Palace of Adil Shah, Sultan of Bijapur.

Our Lady of Immaculate Conception Church 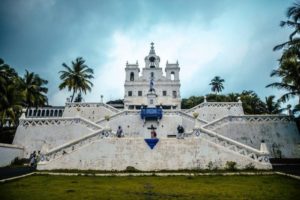 Our Lady of Immaculate Conception Church is situated in the heart of Goa’s capital city, Panjim. Due to this is it popularly known as the Panjim Church. It was built in 1541 as a chapel with Portuguese Baroque style of architecture. It was later replaced by the church that it is today, in the 17th century. This beautiful church,with it’s pristine white walls and zigzagging flights of stairs is a landmark of Goa. It houses an ancient bell that was removed from the Augustinian ruins of Our Lady of Grace Church. This ancient bell that is housed in the tall belfry is claimed to be the second largest in Goa and surpassed only by Se Cathedral’s Golden Bell. 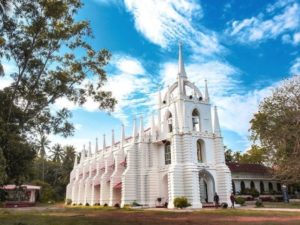 Mae De Deus Church in Saligao is unlike any other church in Goa. Its Neo-Gothic architecture is indeed unique . With its perfect white Gothic spires on either side of the church, it is a breathtaking sight day or night. Built in 1873, this church is relatively new in comparison to others in Goa. With its peculiar and entrancing architecture, it’s a must visit when in Goa. It houses the miraculous statue of Mae De Deus (Mother of God) that was rescued from the ruins of a convent in Old Goa.

Chapel of Our Lady of the Mount 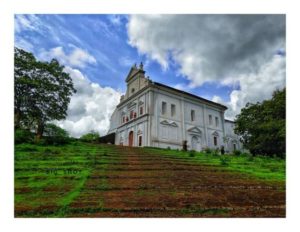 Chapel of Our Lady of the Mount Overlooks the calm and serene waters of the Mandovi river and the islands of Chorao and Divar.  The chapel is situated on the Monte where Adil Shah once positioned his artillery against the Portuguese. It was built in 1519 under the orders of Afonso de Albuquerque. This chapel is believed to be one of the oldest chapels in Goa. He chose this specific location to celebrate the Portuguese’s conquest and dedicated the chapel to the Blessed Virgin Mary. Each year Fundacao Oriente, a Portuguese cultural institution, in collaboration with Kala Academy organizes the Monte Music Festival. This festival which is held in February integrates Indian and Western forms of classical music.

Goa is dotted with marvelous churches from North to South and these are just a few. These architectural beauties withstand the ever-changing seasons and are yet are no match for the churches we build today. The churches in Goa are a must visit at least once. They will certainly enrich yourself with knowledge about Goa’s culture and heritage. After all, Goa has so much to offer!

If you’re booking a trip to Goa or you’re already here and looking for a luxury villa or apartment then we’ve got just the thing options for you. We here at Goa Casitas have a wide range of luxury villas and apartments. These are located in Baga, Calangute, Arpora, Parra and Vagator. With a pool and kitchen, Goa Casitas is the perfect pick for your home away from home during your vacation in Goa.

Architecture of Goa Chapel of Our Lady of the Mount Church of St. Francis of Assisi Mae De Deus Church Our Lady of Immaculate Conception Church Se Cathedral St. Cajetan Church The Basilica of Bom Jesus